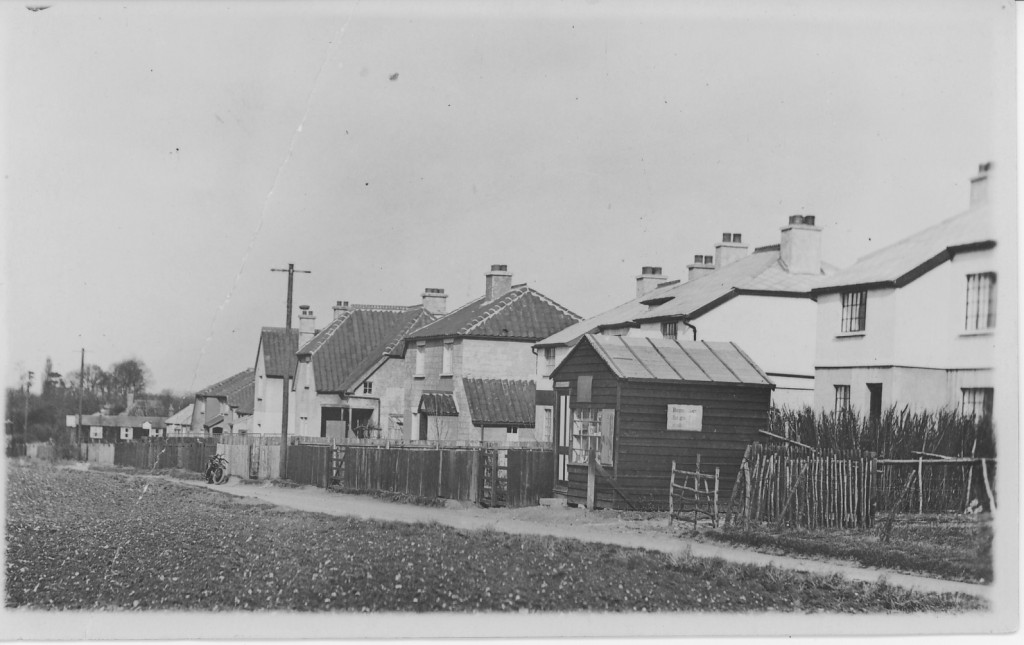 New House Lane has come a long way since 1930.  The shed was the local shop before a purpose built unit was added to the house.  That in turn has ceased to exist and as with far too many village shops the Super Markets have virtually wiped them out.  The road is now metalled and although narrow is a two cars width.  The footpath was an addition in the early sixties. 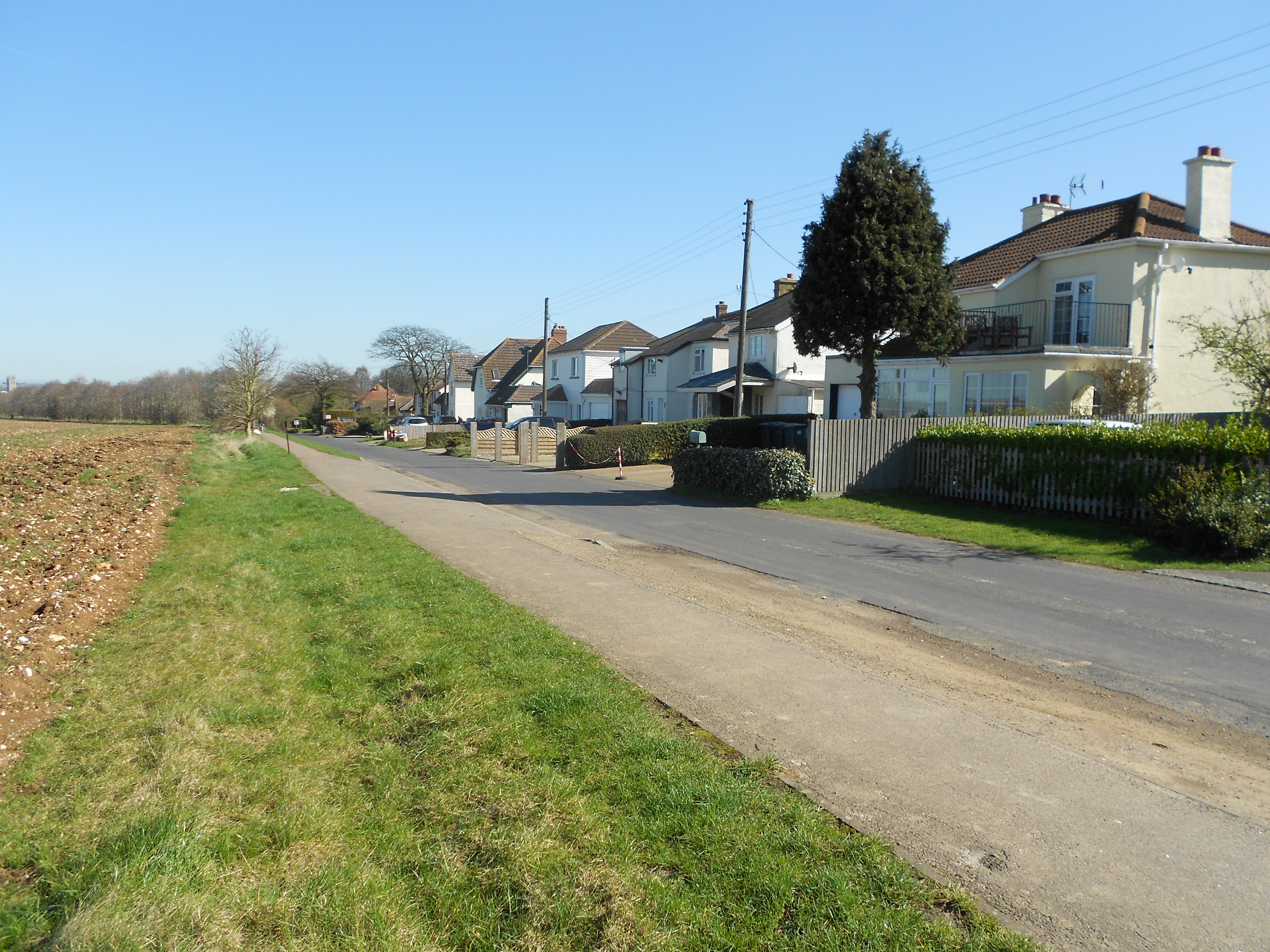 The same view 2011.  The shop has long gone, the road is wider and metalled and we now have a path

The Hilltop area came of age in 2003 when it gained charity status as Hilltop Community Association (Canterbury) but a fledgling community goes back much further and without it Hilltop as we know it today would not exist.  The roads of New House, Iffin and Merton Lanes existed but there were few houses, in fact some were converted old army huts.  The land between New House Road, as it was then, and Iffin Lane was divided into 10 acre small holding plots but as there was no mains water supply or stream this prevented them from being commercially attractive to potential clients.  Therefore, quarter acre plots were sold off for housing.  Between the wars a community emerged and Circa 1936 there is the first recorded fund raising event.  This was a Harvest Festival service held I believe at Mostyn (No. 38) followed by a second service and produce auction, raising the sum of £1 14s 9d.  A copy of The Methodist Outlook, which gives a full account of both services, also refers to the marriage of Jack and Doris Boughton who became the catalyst for the Association we know and love today.  The articles are: –

From little Acorns great Oaks do grow and so Hilltop began.  In subsequent years interesting discussions took place between the New House Road Residents and the Parochial  Church Council of the Parish of St. Nicholas.  I have also researched minutes of Parochial Church Council, Church Finance Board etc. and some of the relevant items are reproduced here.  Click on the link below to view.

Some may be aware that it has always been my belief that although the Canterbury Diocesan Board of Finance do actually hold title to the land that St Faith’s Hall stands on, morally it belongs to the residents of the Hilltop area.  This was as a result of a period when people trusted the Church and were not so finically savvy.  Withoiut the efforts of the residents of New House, Iffin and Merton Lanes there would not be the parcel of land and a hall in new House Lane.

For proof of the legal ownership click on the links below: –

Having lived in the Lane all my life I have many fond memories and have witnessed very many changes in the area from oil lamps for lighting, coal for cooking and the wonders of electricity when it came.  Our house was still using catchment water when I came along. The area now enjoy’s the wonders of electricity, natural gas and telephony/broadband all piped into the house.

Prior to having a hall events and celebrations went on, such as previously mentioned in the Methodists Outlook.   Whist drives in residents gardens and a particular good example being the VE Day party held in a farmers field, which it is believed was in 1946 a year after hostilities ended. This event would have only been possible by the residents pooling their food ration stamps. 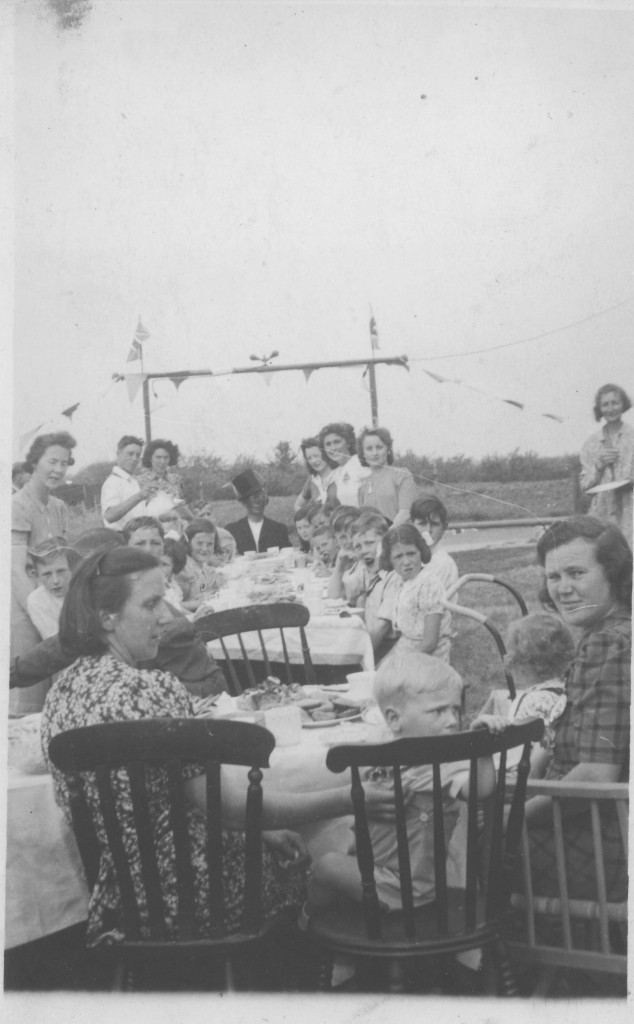 Identified people in  the picture are as follows: –

Bessie Smith with myself and Frances Smith with son Peter on her lap.

One of the places where the wives could work was at New House Farm (King’s Farm) and this gave us children a wonderful playground.  With todays health & safety we would not be able to roam as we did around the farm, often into areas that were off limits and on reflection perhaps quite dangerous.  There were ladies from the Thanington Estate area and from Hilltop.  The stalwarts of Hilltop are pictured below. 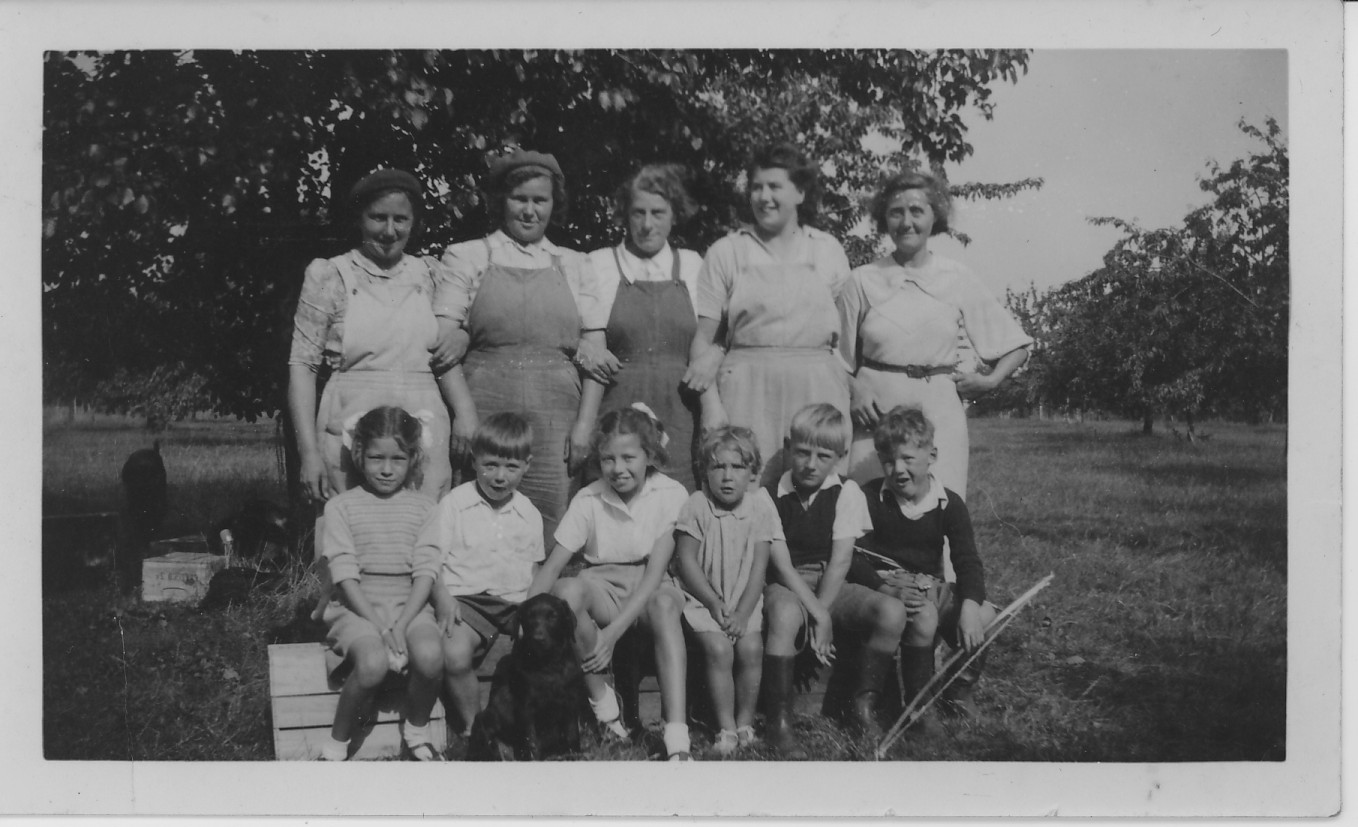 Back row left to right: –

New House Farm is run today by John Hinchliff son of Betty and Fred and has moved on dramatically with modern farming technology and the workers no longer come from Hilltop or Thanington but from Eastern Europe.  Thank goodness the farm is still in the hands of a farming family. 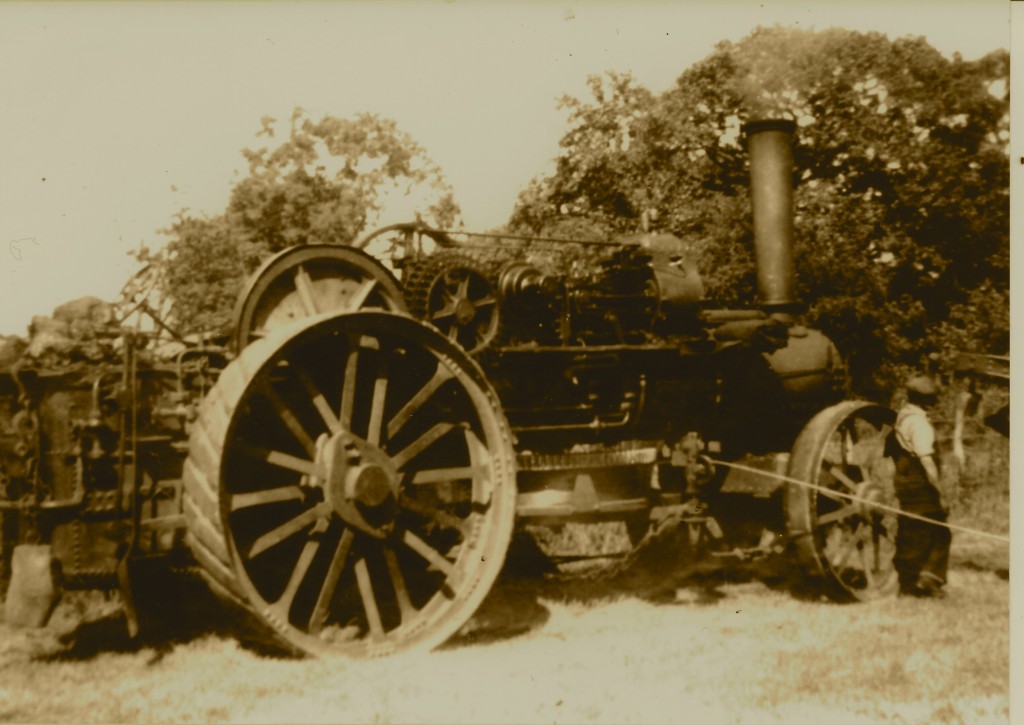 Wincheap Farm was another major influence on  the area with the Lilywhite family being good mixed farmers with sheep, fruit and arable.  It was one of the highlight of the year when Holman’s traction engines arrived in the autumn to plough the fields. Pulling a four or five furrow plough.  The two pictures are from the Tom Webb collection.  Today it would most probably be a massive John Deere tractor doing the same work in a fraction of the time.  That one big tractor is driven by a single man and is most probably fitted with GPS to achieve the utmost efficiency. The steam traction engine system required one man to each engine and two men on the plough.  Not so

efficient but at least it created jobs. 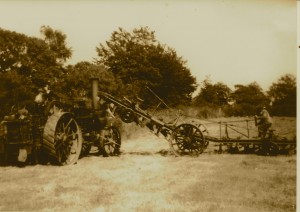 It is not identified which field was being ploughed but I feel it is the field to the west of the footpath from New House Lane to Cockering Road. The farm today is owned by a property developer and is currently farmed by the White Brothers and it is quite something to see their equipment manage the land throughout the year and particularly the harvesting with combine harvesters that perhaps would not look out of place on the mid-west prairies. The picture below is September 2012 showing flaxseed being harvested.  In the days of the steam ploughing this would have been harvested using a reaper with the grain being recovered later with a thrashing machine, which would have also been powered by a steam traction engine.  The picture illustrates a classic view of Canterbury from Hilltop with the water tower and university in the background, this cannot be lost to developers greed or local governments ineptness. 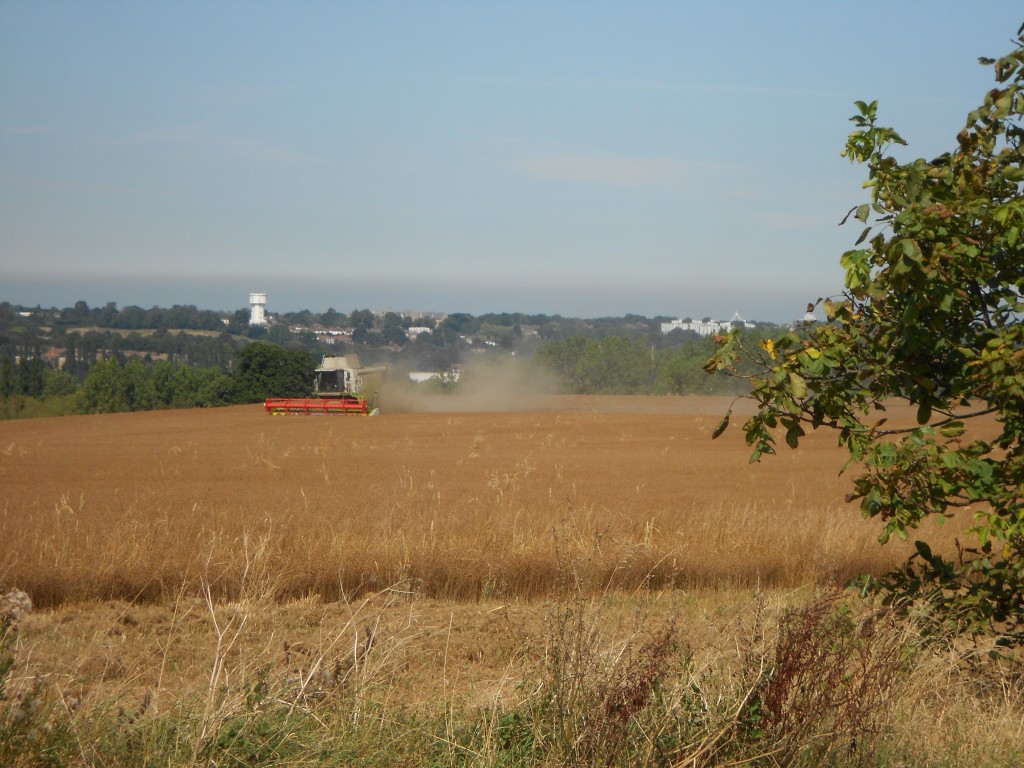 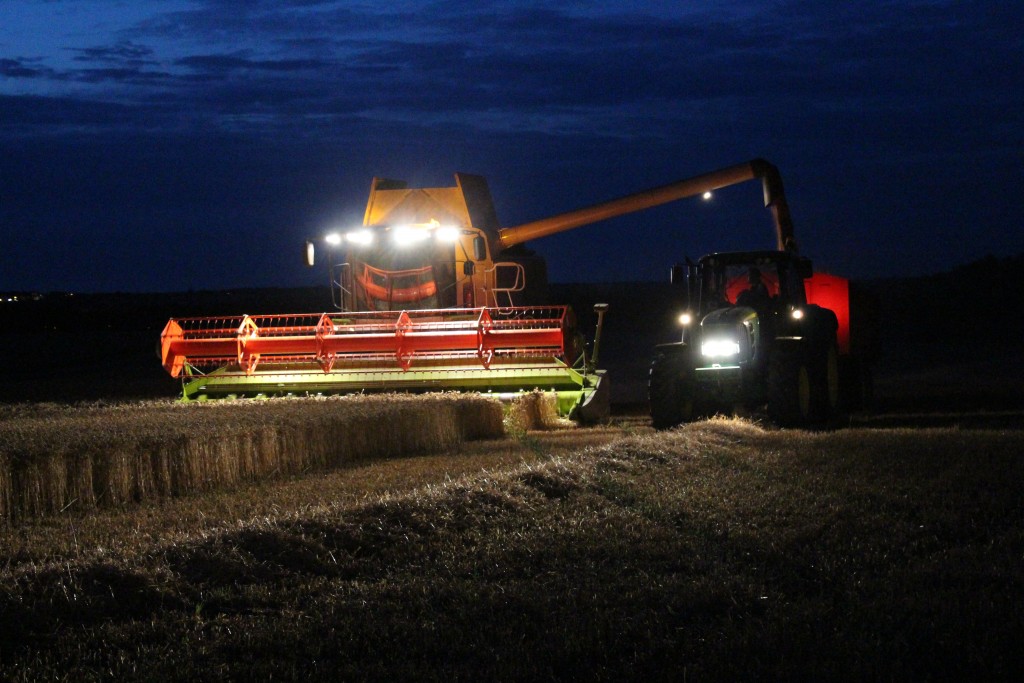 A rare balmy night in 2013 when the harvest extended into the night. 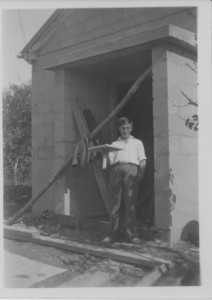 St Faith’s Hall was a triumph for the residents, particularly because the funds to build it were raised in the Hilltop area and for the men/husbands because they gave so much of their time through a summer in actually building it, when they all would have had large gardens fully cropped to look after. Times were difficult and everything you could produce helped the budget & rationing coupons plus it saved money.  It would have been a testing time for the wives with young children, who supported them – I bet there were some tensions during 1951 in many households.

Click on the link to see a reprint from the Kentish Gazette.             Hall Building Team

With the Queens Jubilee in 2012 the picture below of the fancy dress competition at the Hall on Coronation Day 1953 is interesting.  Name those people. 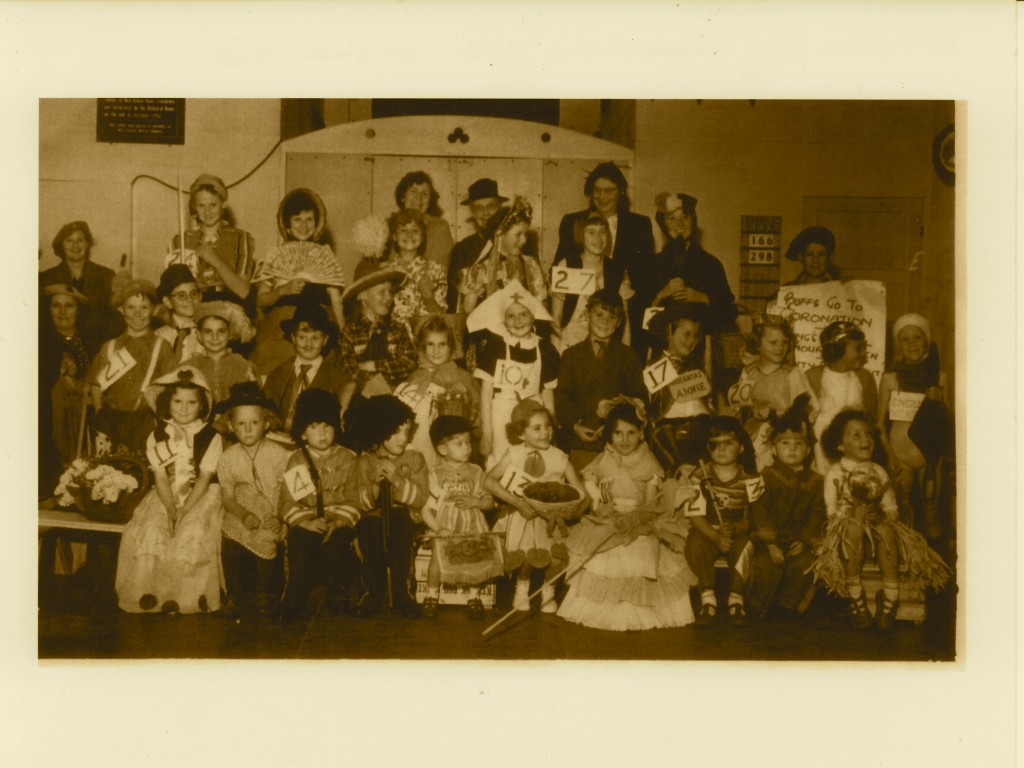 This website is relatively new and very much under development therefore this page is only a taster of things to come and hopefully will develop.  I would like it’s development to be a journey of discovery and perhaps reflections for all of us, particularly those of us that spent our childhood in the Thanington Without area of Canterbury and any additions, either written or pictures would be most welcome.