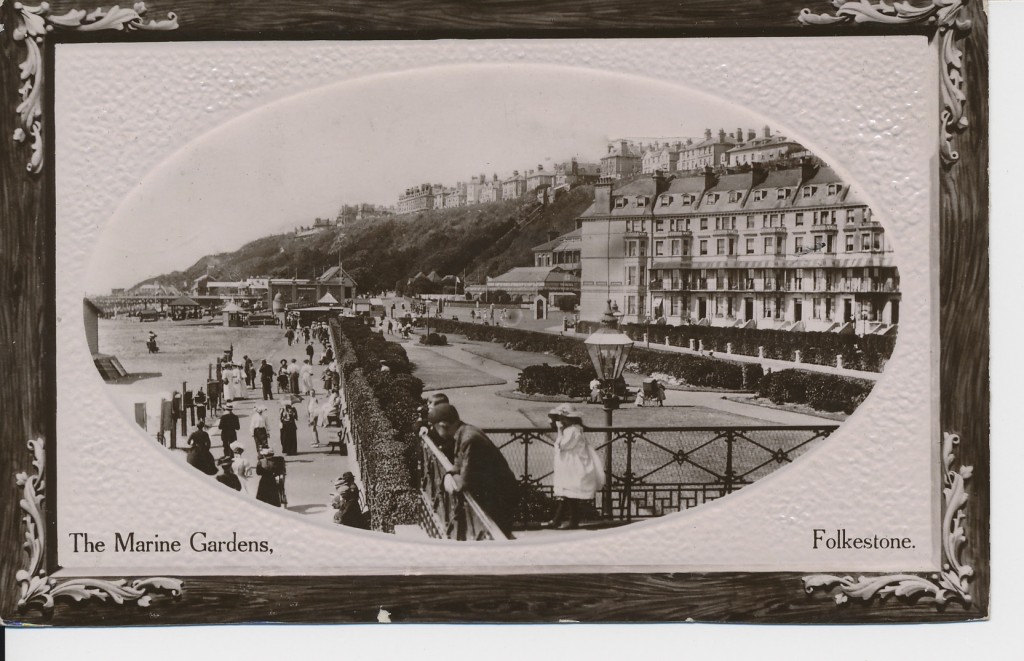 Folkestone:  Always Cinderella to Dover as a port but has been a significant contributor to the military & maritime history of East Kent. As a seaside resort the opposite applies. The postcard shows Marine Gardens in very different times, 1911. 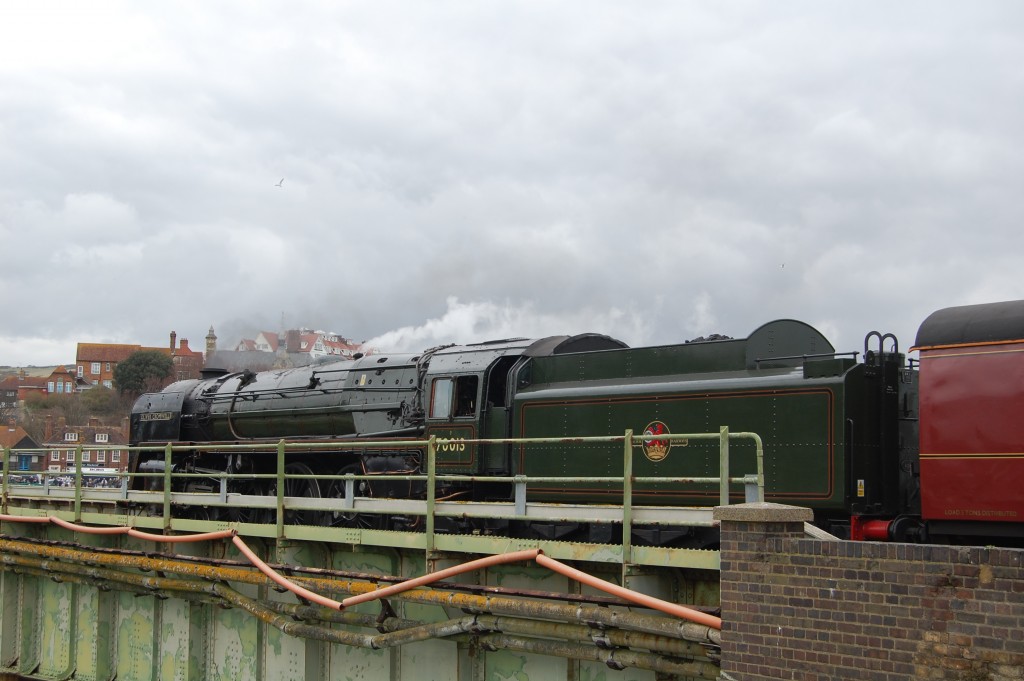 2009 and the final steam train hauled by the Locomotive 70013 Oliver Cromwell crosses the harbour over the swing-bridge, which is part of the Memorial Line, so called in memory of all the troops that departed via Folkestone particularly World War 1, most of which would have arrived by rail and embarking to an uncertain future.  The line is now redundant, It had the steepest gradient (1-in-30) of the country’s mainline rail network and it closed on the 31 May 2014.  What a shame it is that this facility has   not been preserved but there is change and perhaps for the better.  Preservation would have been good and a lasting memorial to the fallen.  Unfortunately it’s another piece of classic British engineering which has, most probably been lost to developers. People of a certain age will remember the tank engines two at the front, one at the rear taking the “Golden Arrow” coaches back up to the mainline to be reunited with the prime locomotive.  The line is iconic for two reasons, the soldiers going to war would have had a very different experience of Continental Europe compared to the rich and famous who travelled on the Golden Arrow/Orient Express. 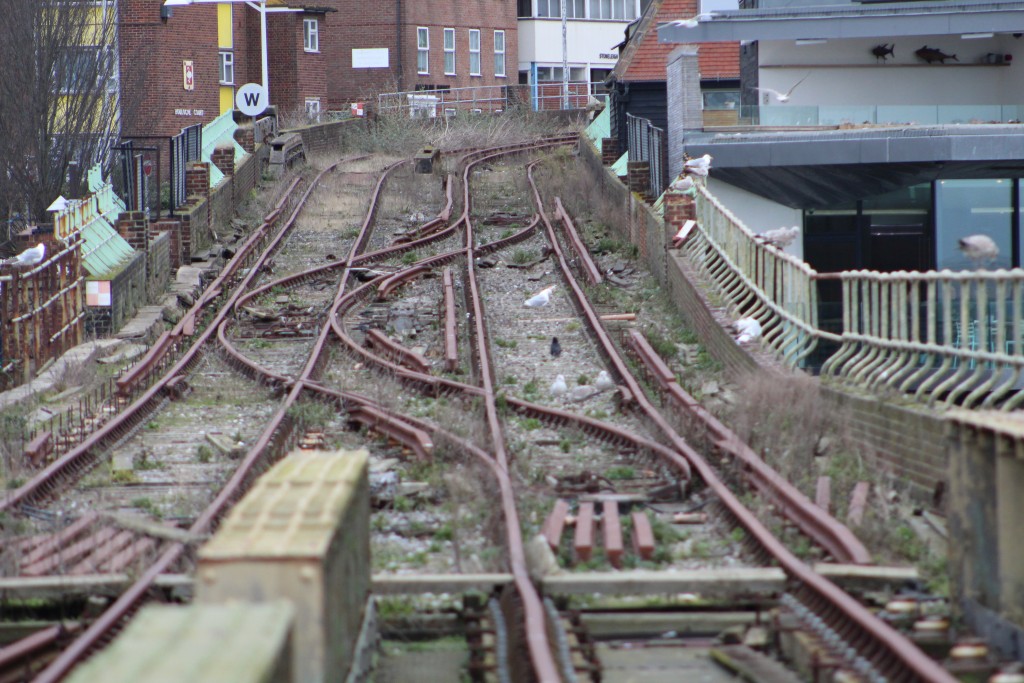 The view from the the Harbour Station looking towards the town across the swing bridge. 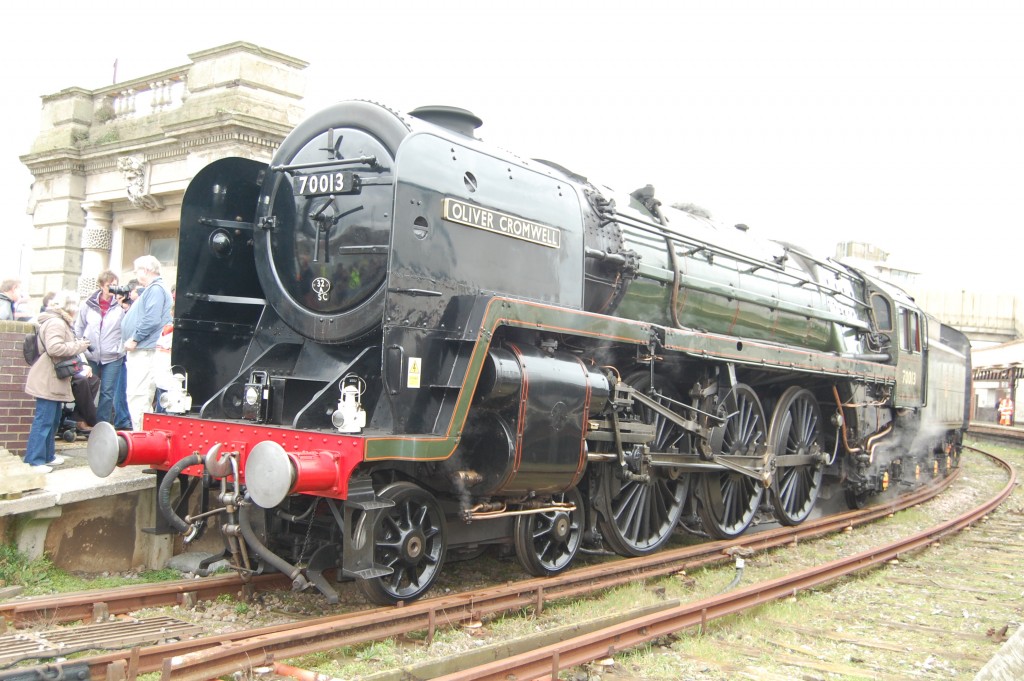 Britannia Class Locomotive Oliver Cromwell at Harbour Station waiting signal to ascend that heritage climb.  How lovely does she look?  Notice the facade in the background another sign of a grand age. 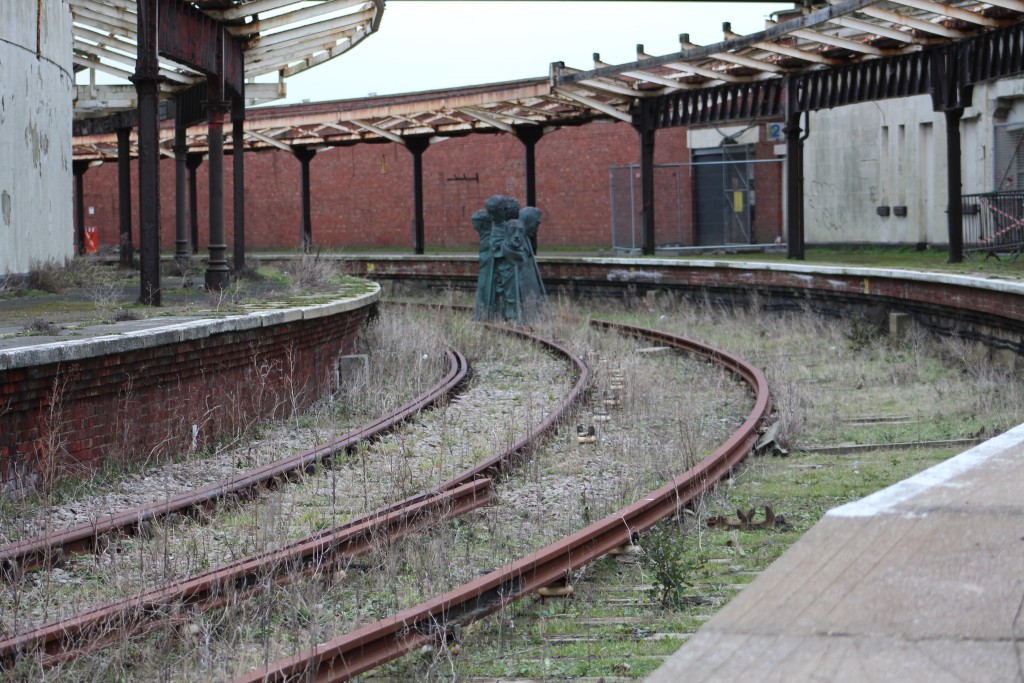 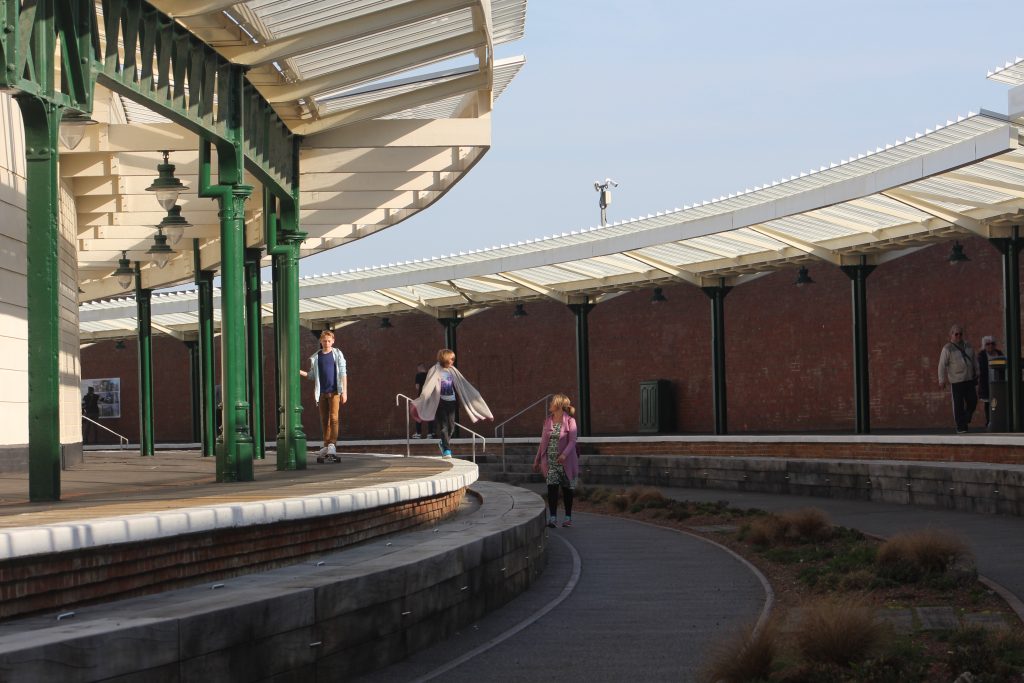 Unfortunately Folkestone, for so long seemed intent on destroying it’s rich heritage.   Fortunately the harbour arm and station are under-going regeneration, which is to be applauded. 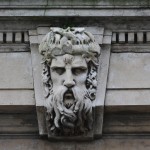 The station facade icon still remains (February 2015) and what has been restored is lovely and becoming a cafe culture and excellent facility for promenading. Work is on-going and when completed could be the envy of the Kentish resorts.  Recorded here are some redundant elements of the vintage periods when travellers arrived by train to board the Steam Packets Ships others leaving by Ro Ro ferry.  The basic Link-Span structure still remains. Notice the iconic viaduct in the distance. 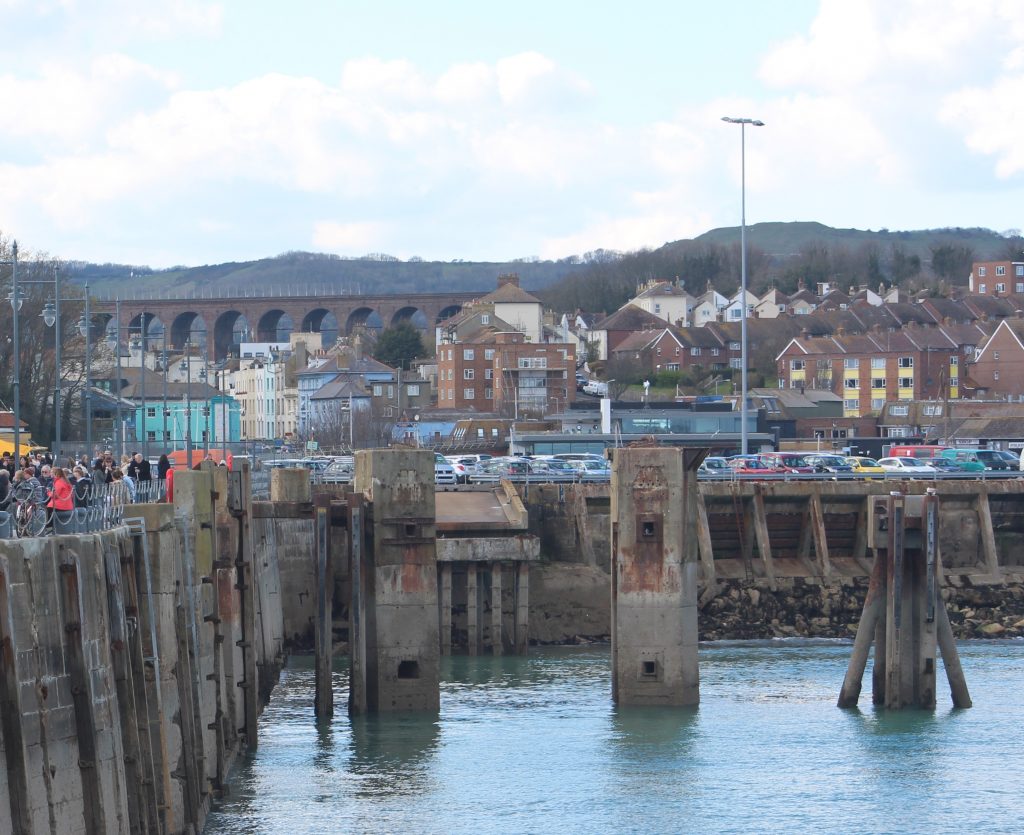 The curved platform and pedestrian bridge, the latter has been demolished, show interesting elements of times past.  Originally there were two Stothert & Pitt dockside cranes on gantries spanning the station to unload the Steam Packet vessels. 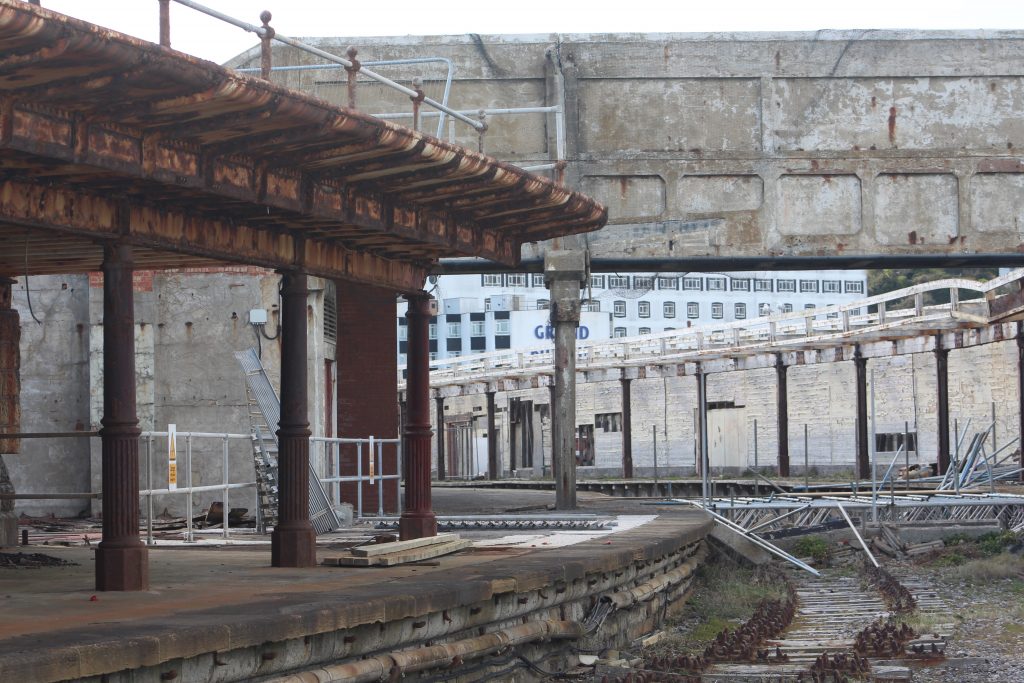 There were plans to run a rail/tram system onto the harbour arm. Forl details of the proposal click on the link.  The Remembrance Line website. 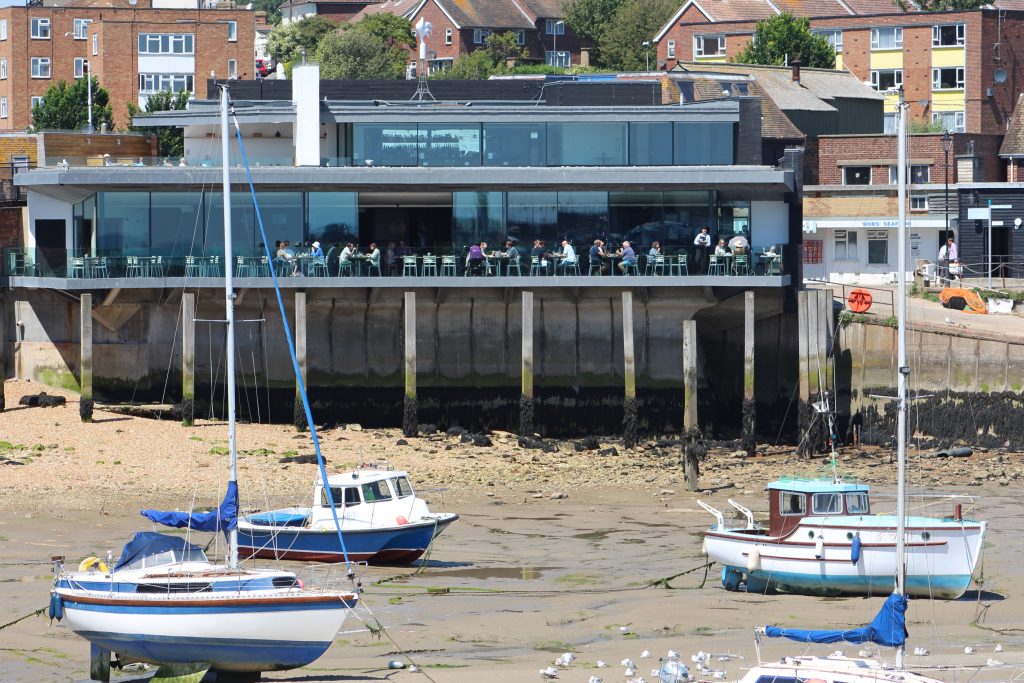 The Harbour is a marvellous asset to the town and slowly develops, an example is the Rocksalt Restaurant, which occupies the old ships chandlers building in the fish market.

The inner harbour would have been filled with colliers in the past, now it’s refuge for smaller craft, which help keep the place alive and have no requirement for the swing-bridge operation. 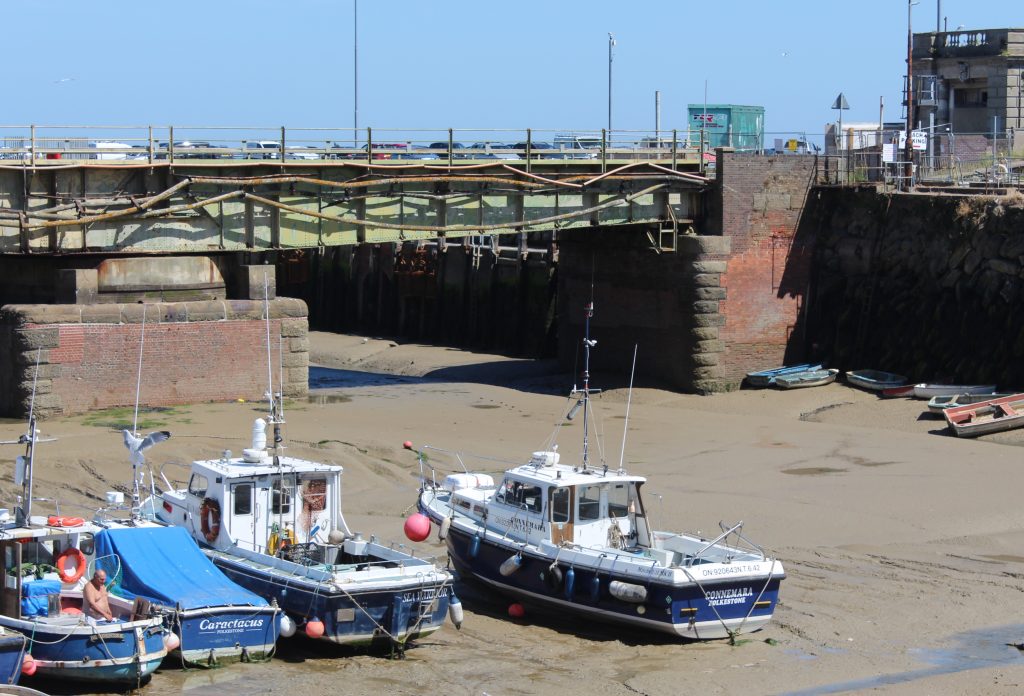 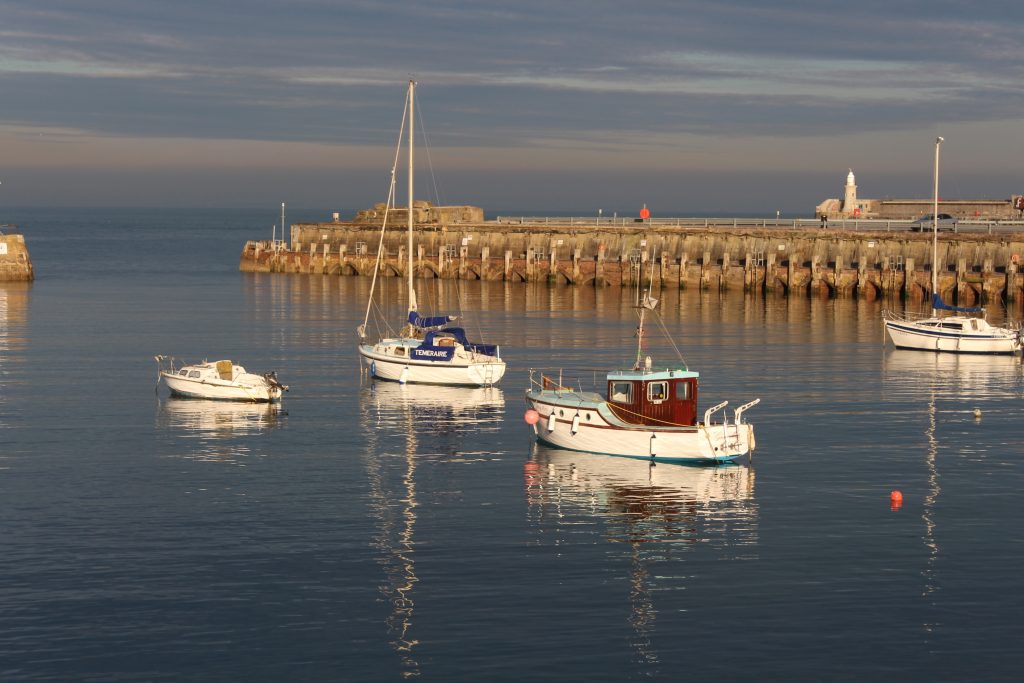 sunset view is taken from the Rocksalt Restaurant 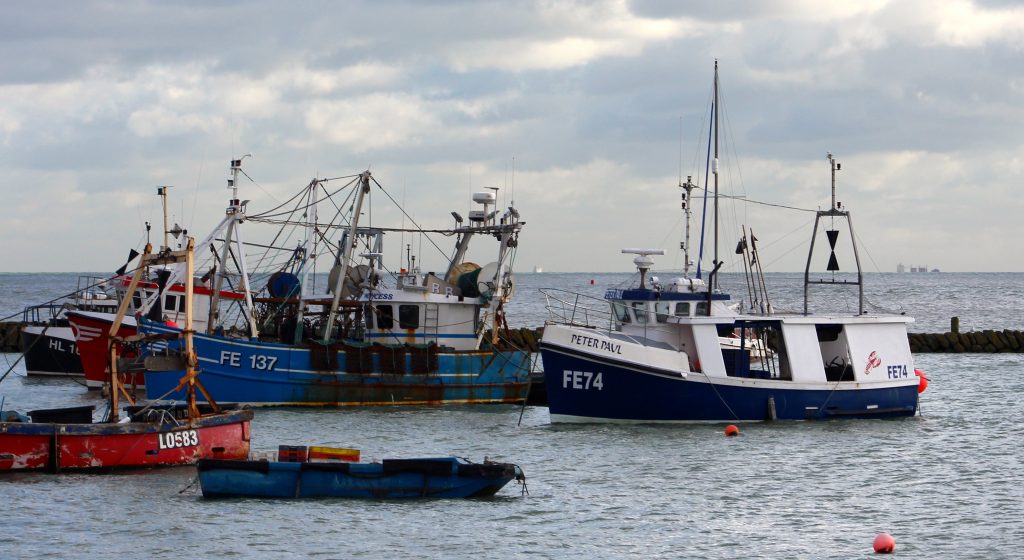 Part of the Folkestone fishing fleet

The outer harbour is still the home of the fishing fleet and an excellent place (or should I say plaice?) to buy fish or even a good old fashioned plate of fish & chips.  The sunset view is taken from the Rocksalt Restaurant an added bonus to a lovely meal. 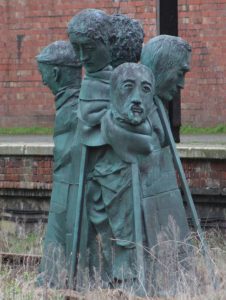 and Cornela Parker’s version of the Copenhagen ‘Little Mermaid’ being two examples.  All positive examples of progress. 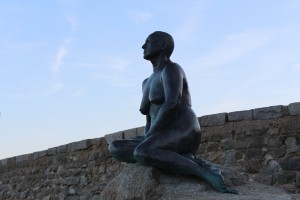 Folkestone motto; which previously, appeared to be pull it down, walk away and leave a void? Perhaps now a new Folkestone is beginning to appear as green shoots of regeneration sprout. 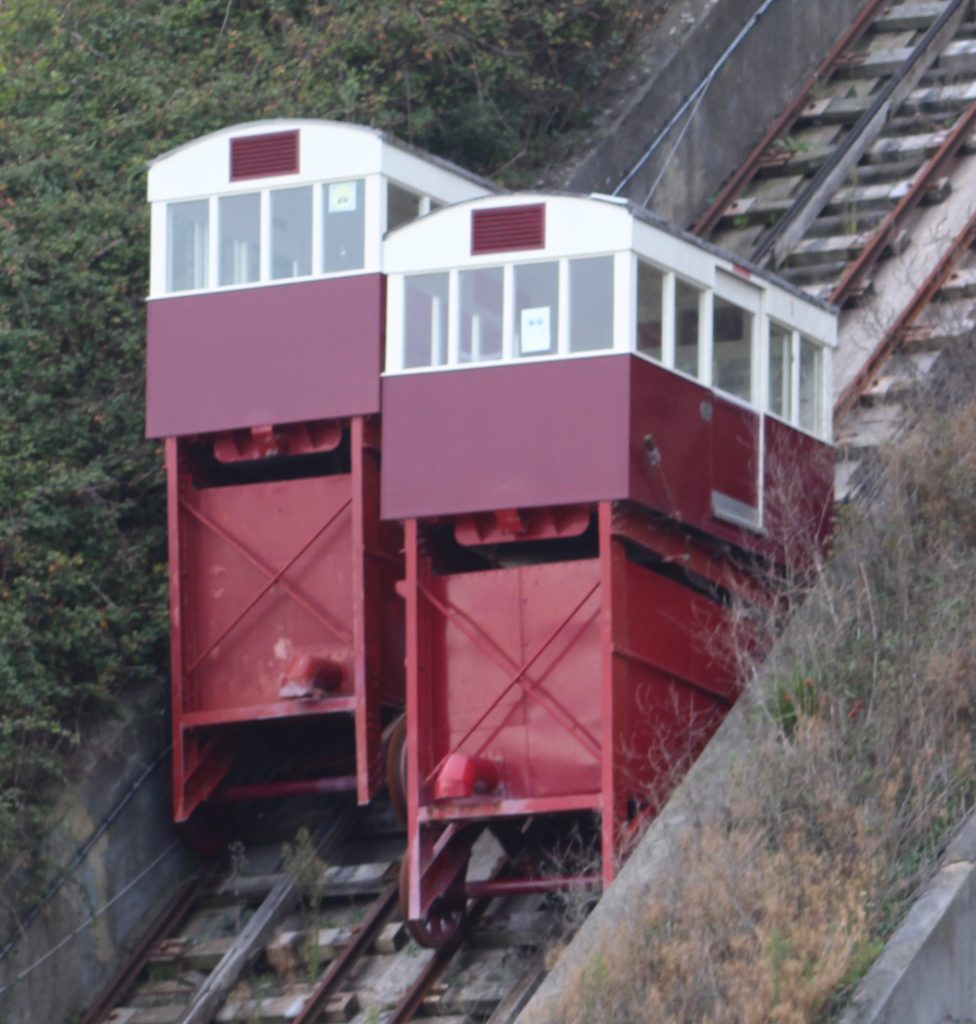 The sorry state of affairs with both carriages parked up

The funicular (lifts) are  currently not operational (April 2018) due to HSE requirement for modification to the braking system.  Hopefully the funds will be found to include this iconic asset in the Folkestone revival. 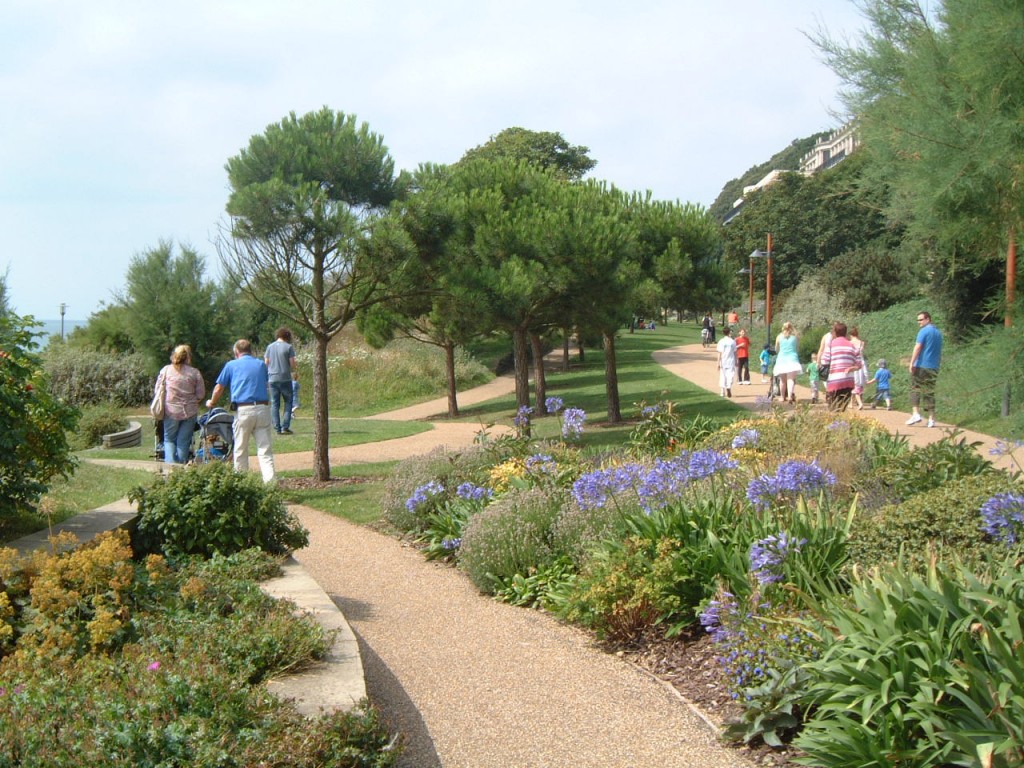 The Lower Leas Coastal Park is a wonderful, subtropical garden and has an amazing children’s play area.  Proving what investment can achieve. 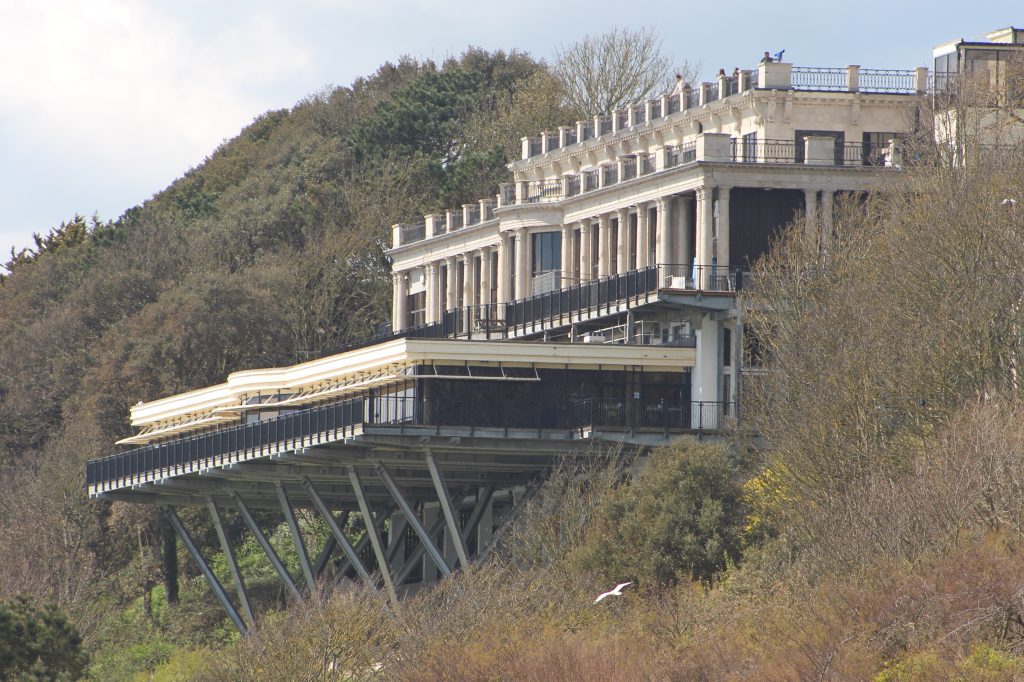 The Leas Cliff Hall remains a most important icon of the area, hanging on to the cliff as if by magic. 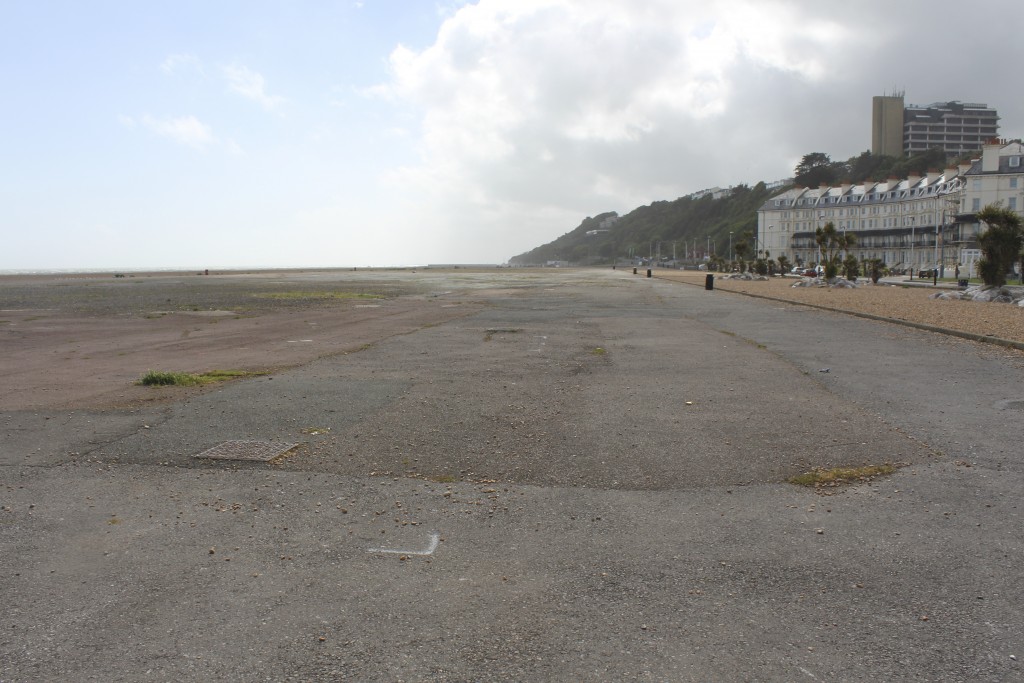 Who remembers the Rotunda and the Boating Pool? All demolished long ago to make way for redevelopment, hopefully now new life will emerge from this derelict site. 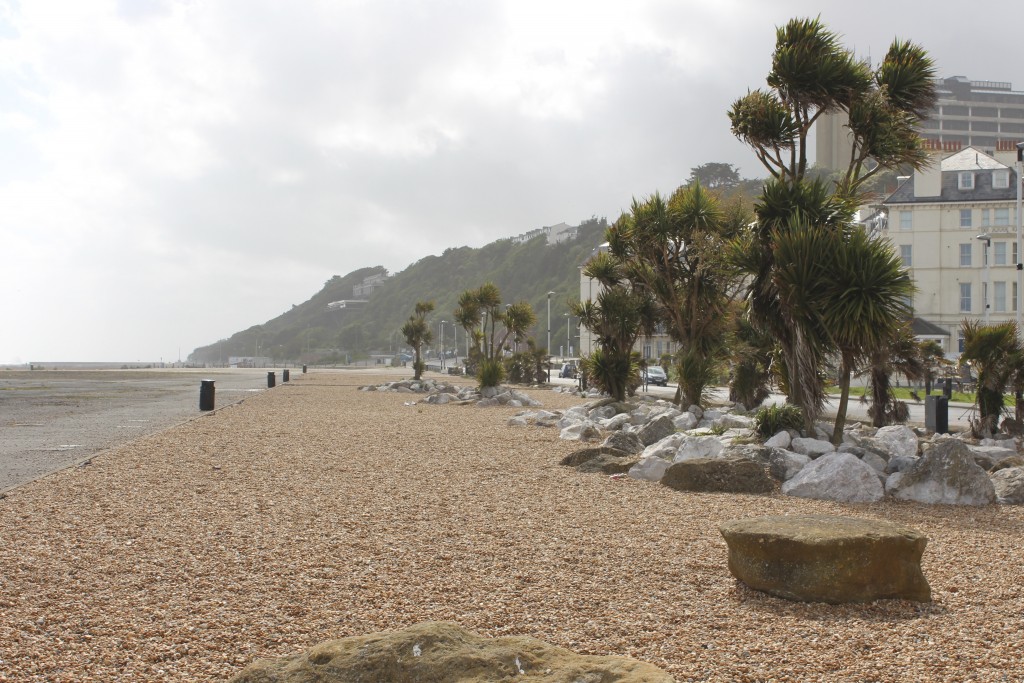 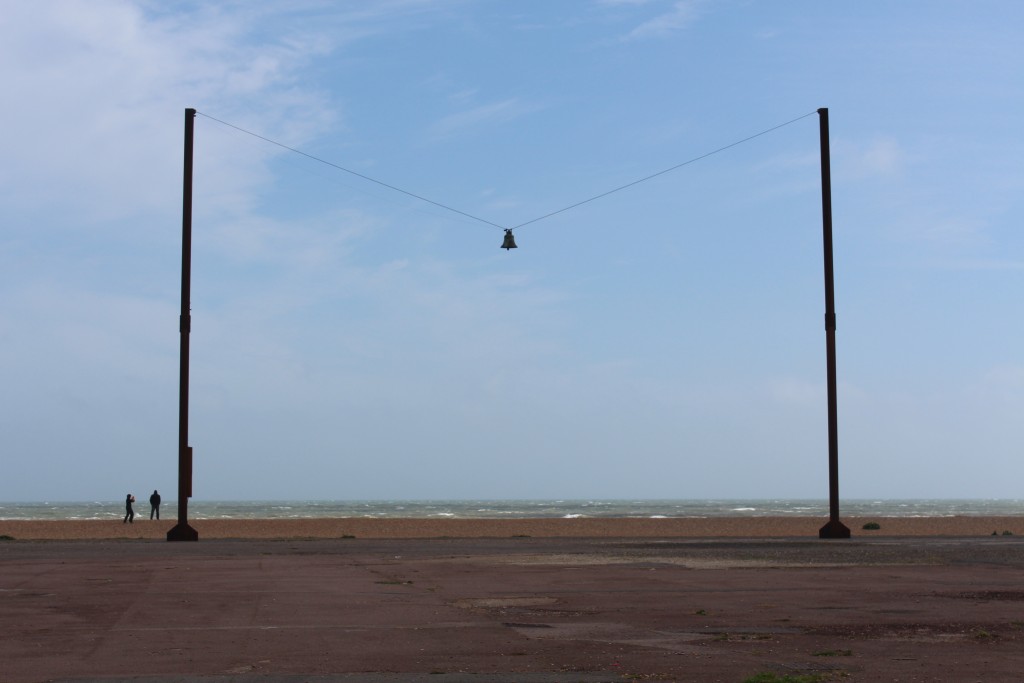 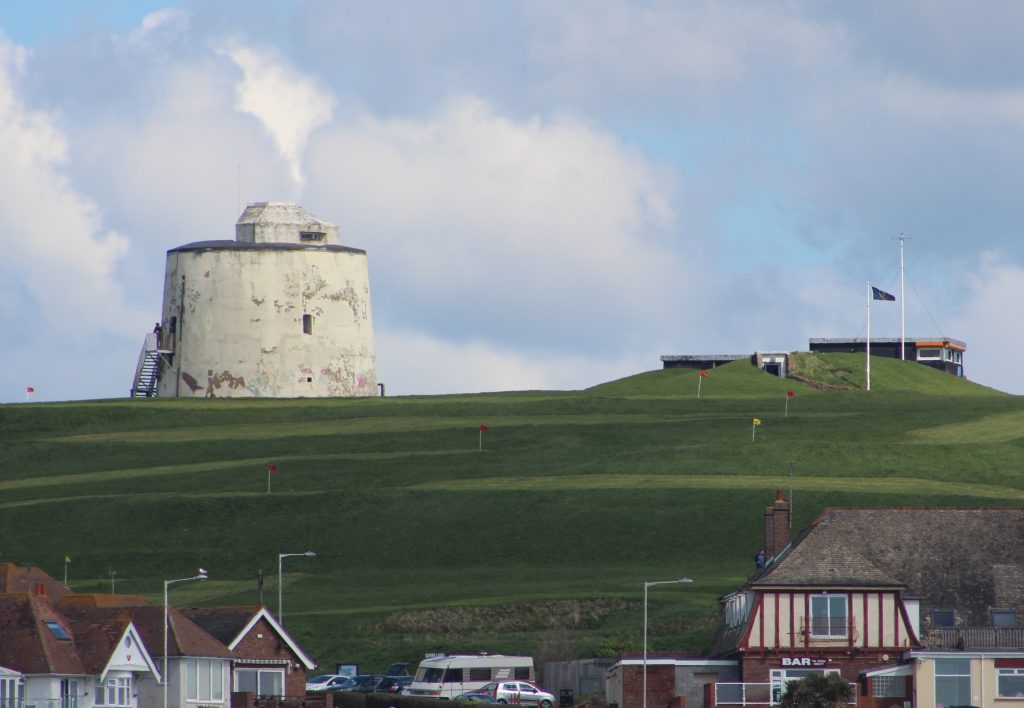 Folkestone we are watching with anticipation and hopefully something special  is emerging.

If anyone has old Folkestone photos and would like to share them on this site or indeed comments all would be appreciated, subject to approval.